The Museum will host an outdoor exhibit of unique photographic portraits, Feeding Durham’s Hungry, beginning May 21 and running through June. Stop by 500 W. Main St. May 21st from 5-8PM to check it out. The origin of these images is a story in itself. Last summer, while… Read More 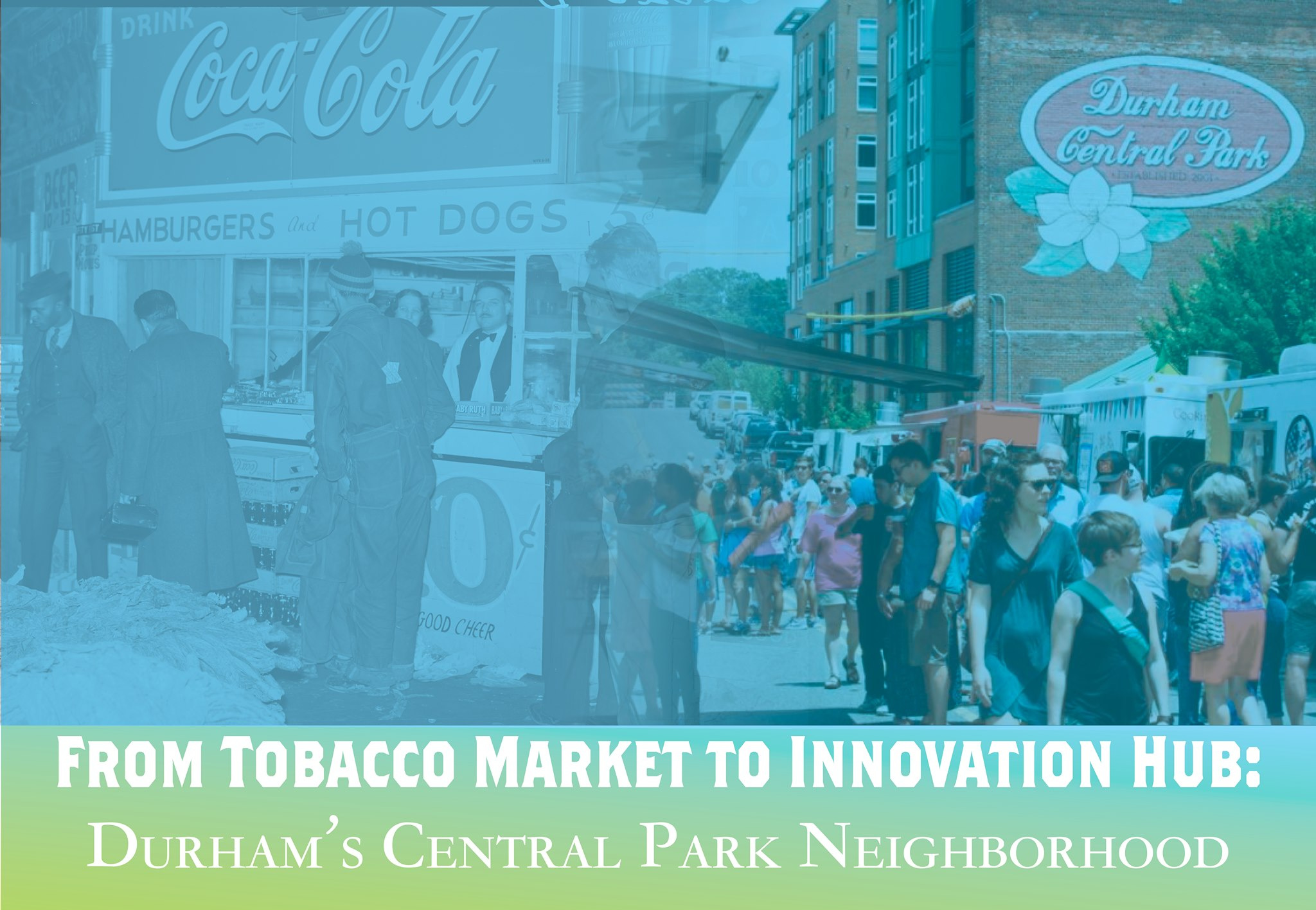 New exhibit to focus on evolution of the city’s Central Park neighborhood The Museum of Durham History will open its doors for the first time since the start of the pandemic on Friday, April 16. As part of the opening, the museum is unveiling a new exhibit called… Read More 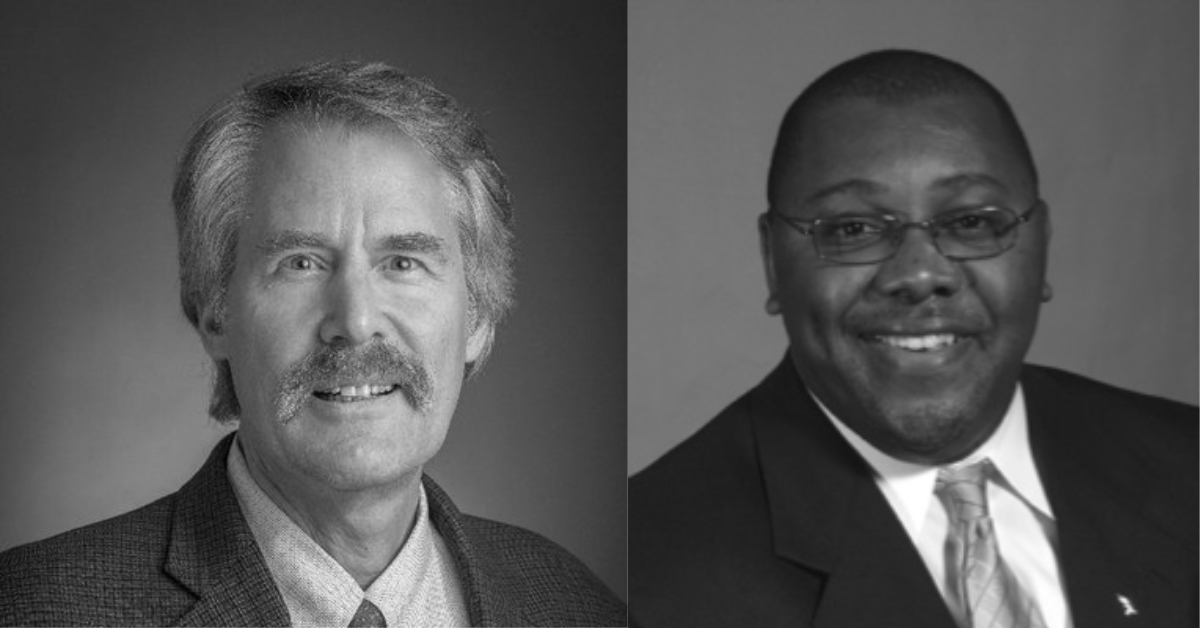 Please join us at the Museum of Durham History on Friday, February 15th from 6-8pm as we host an author discussion as part of our celebration of Black History Month and ongoing programming related to the Louis Austin and the Carolina Times exhibit. Curator and Louis Austin biographer Dr. Jerry… Read More 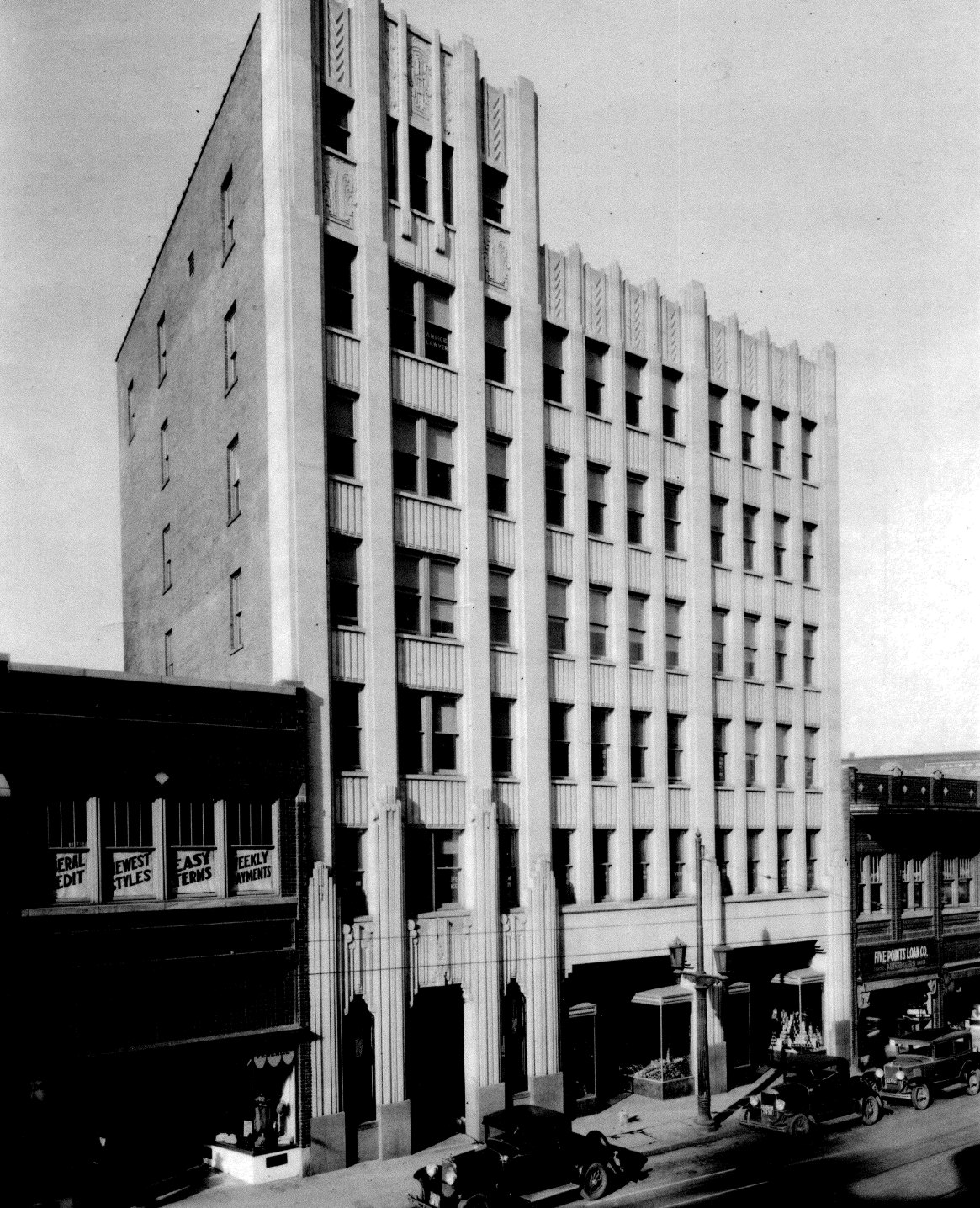 “The Woman Who Made Snow” Exhibit Opening- Dec. 15 at 6PM

Please join us on Friday, Dec. 15 from 6-8:30PM at the Museum of Durham History (500 W. Main St.) for the opening event for our newest exhibit, The Woman Who Made Snow, highlighting the historic Snow Building and the woman who made it happen. This event is FREE and open to… Read More 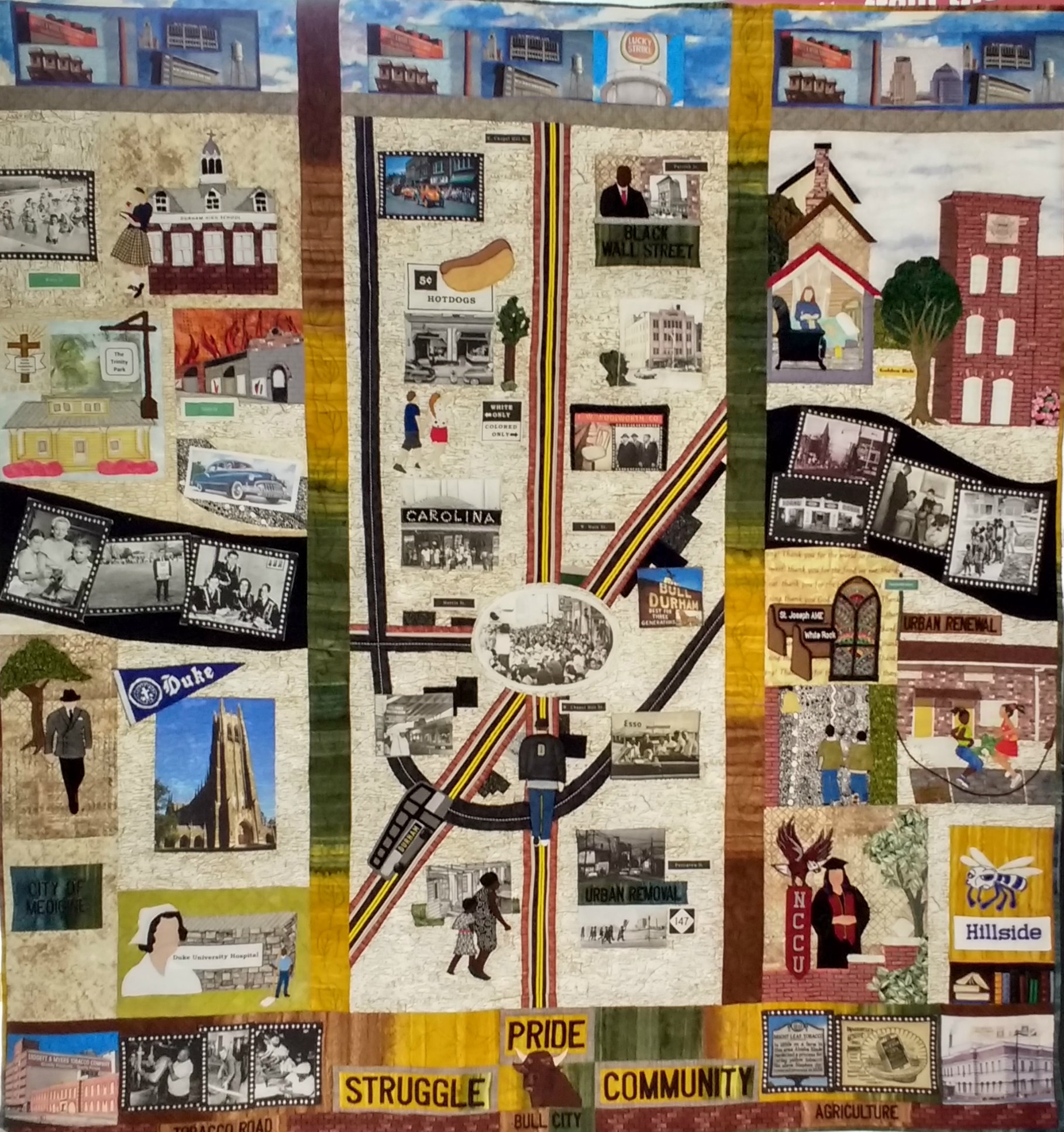 “Memories of Durham Story Quilt” makes its home in MoDH

On June 16, we were honored to unveil our Memories of Durham Story Quilt as part of Third Friday Durham festivities. The quilt is a permanent part of the MoDH collection and is on display in our Story Room, made possible with generous support from the Mary… Read More 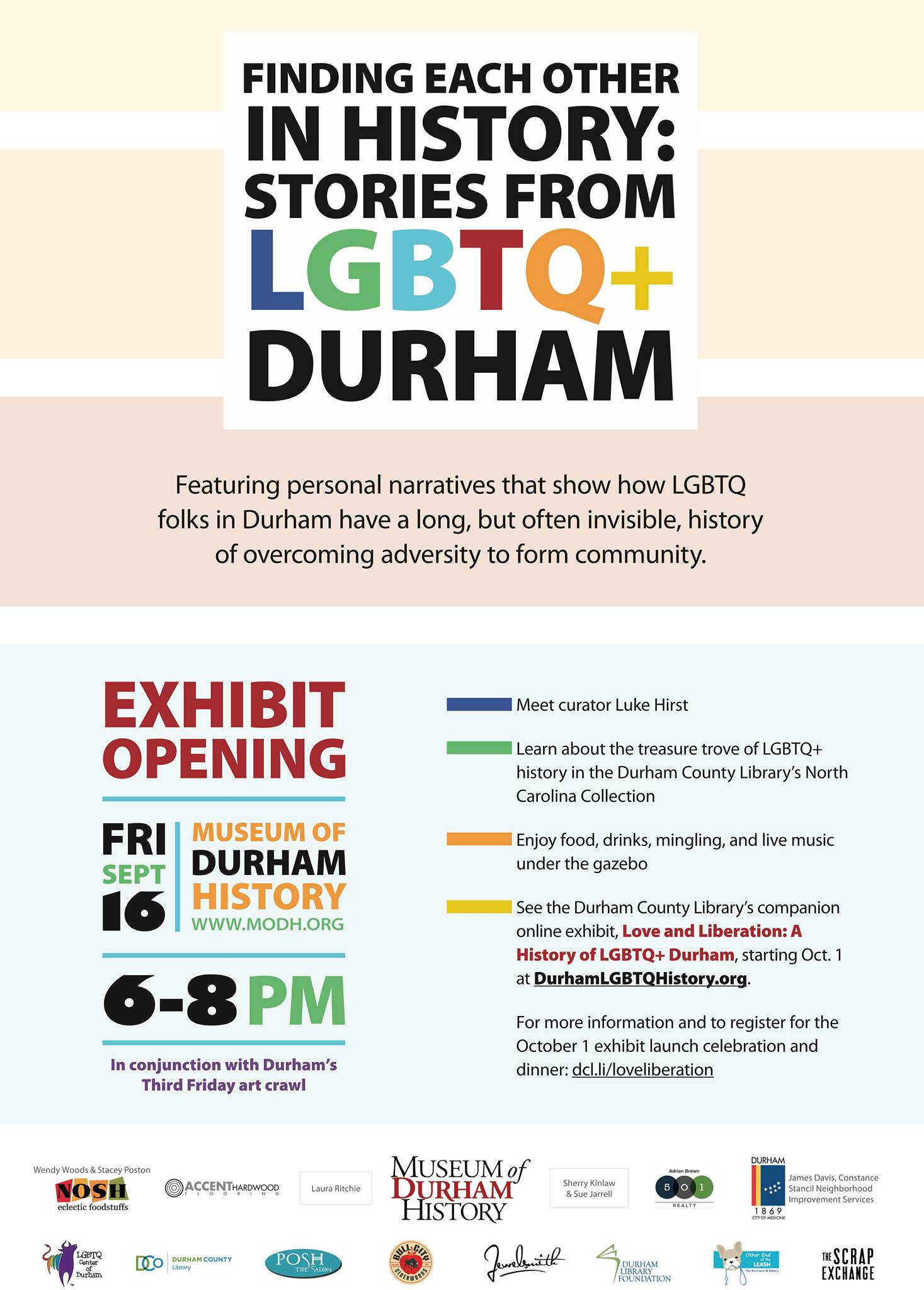 Sept. 16 opening! Finding Each Other in History: Stories from LGBTQ+ Durham

The MoDH celebrates the unveiling of a new exhibit on Friday, September 16, 6pm to 8pm, at the Hub, 500 West Main Street downtown. Finding Each Other in History: Stories from LGBTQ+ Durham features personal narratives that illustrate how LGBTQ people in Durham have a long, but often invisible, history of overcoming adversity to… Read More 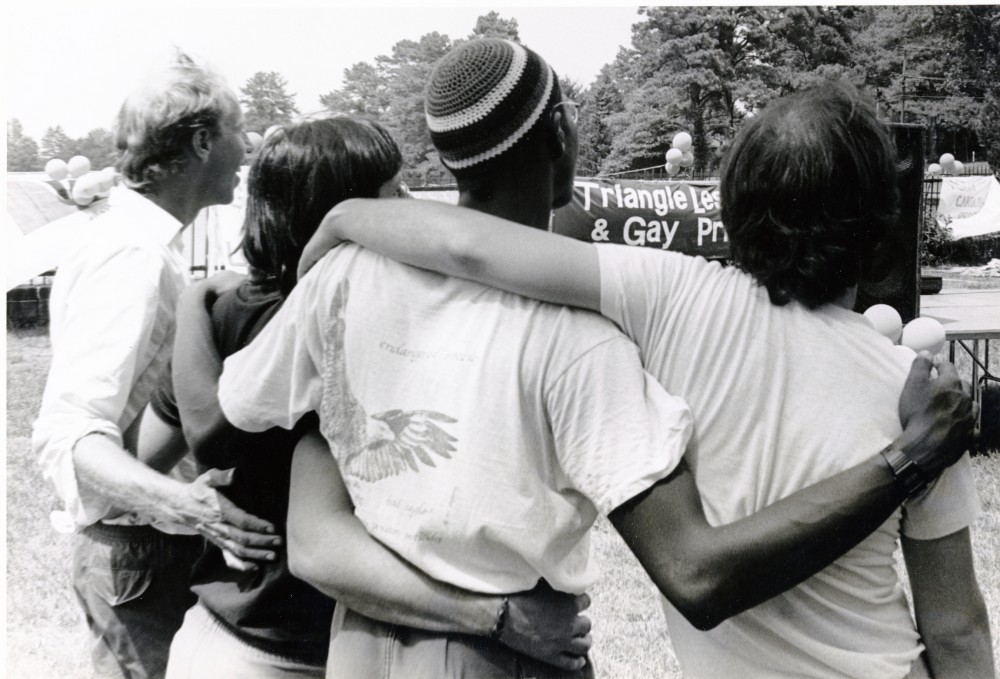 Finding Each Other in History: Stories from LGBTQ+ Durham

Finding Each Other in History: Stories from LGBTQ+ Durham is a new exhibit opening at the Museum of Durham History on September 16, 2016. This citizen-curated Our Bull City exhibit features personal narratives that show how LGBTQ folks in Durham have a long, but often invisible, history of overcoming adversity to form community.  This exhibit includes… Read More 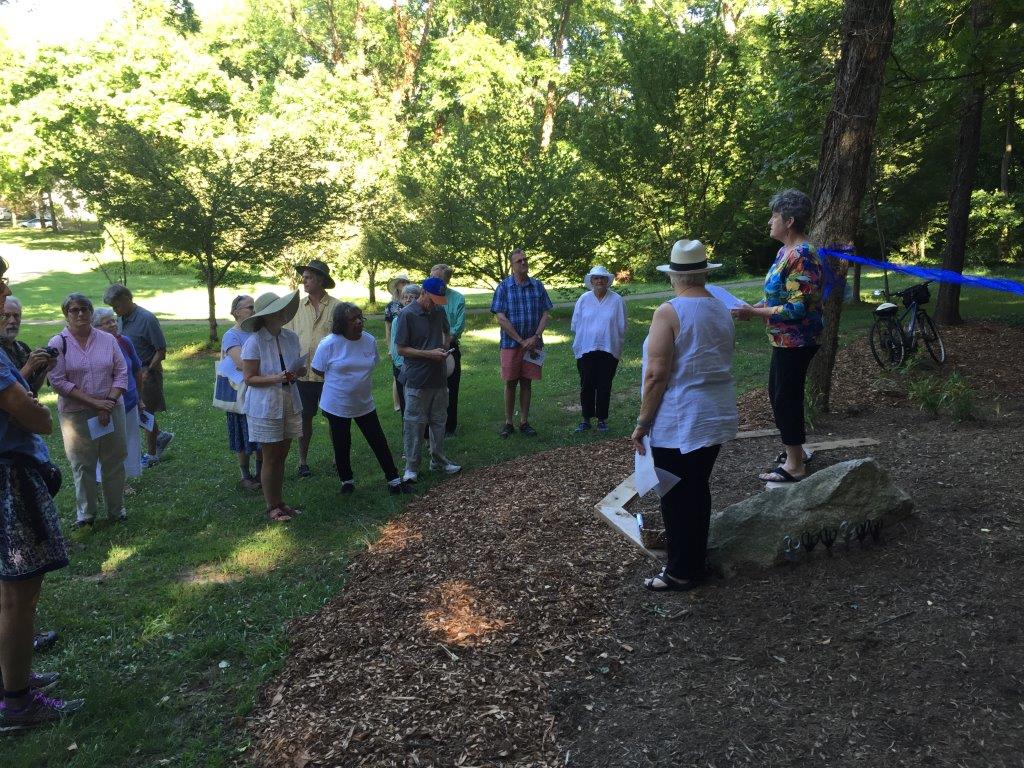 Last month, we had the pleasure of dedicating two History Groves in one weekend. The Durham Center for Senior Life (DCSL) hosted a ceremony on the plaza in front of their building, where the grove honors the late Becky Melton Heron, a Durham county commissioner from 1982-2011, and other DCSL founders: Howard Clement of… Read More

RT @RobinKirk: The new PauliMurray doc was nurtured through the tireless work of Durham's own @PauliMurrayCntr. The film opens Friday @Car…