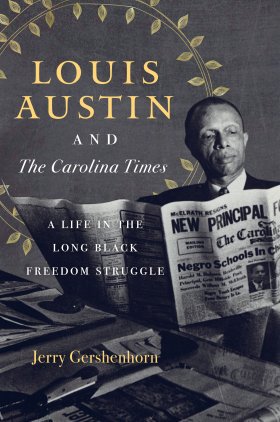 The following article, by Jerry Gershenhorn, Professor of History at NCCU first appeared in the monthly column in the News and Observer and also in the Triangle Downtowner. The column featured essays on Durham history by members of the MoDH’s History Advisory Committee.

During the early- and mid-twentieth century, when white supremacists and Jim Crow laws ruled the South, black journalists played a pivotal role in the struggle for equal rights. Durham, North Carolina, was home to a particularly courageous black journalist, Louis Austin, who edited and published the weekly newspaper, The Carolina Times, from 1927 to 1971.  The grandson of slaves, Austin was born in 1898 in a one-room house in Enfield, North Carolina, about 85 miles east of Durham. Throughout his life, he bravely fought against economic injustice, police brutality, racial segregation, and white supremacy.

In his editorials, Austin did not mince words–the paper’s motto was “The Truth Unbridled.”  In 1938, after a filibuster by southern U.S. senators, including North Carolina’s Josiah Bailey and Robert Reynolds, had succeeded in killing an anti-lynching bill, Austin sarcastically observed that North Carolina’s “liberty loving senators” had helped win for the white man “the right to lynch.”  In this editorial, printed next to a photograph of a naked African American hung from a tree by a lynch mob, Austin wrote, “Thank God the right to lynch is a white man’s right.  He alone enjoys the lust of human blood.  He alone enjoys carrying in his pockets human toes, fingers, etc., of a dead Negro, as a reminder that he is the supreme ruler of this nation.”

Despite frequent threats, Austin refused to temper his outspoken advocacy for racial equality.  The courageous editor once told an interviewer of an occasion when a local white man told him to leave town, or else.  Austin replied that he would not be intimidated by him, or anyone else. That night, a group of Austin’s friends stood guard on his front porch to defend him.  There was no attack.

Austin’s advocacy did not stop with the printed word. Like other contemporary militant black activists, he devised a new strategy, which employed legal action and embraced electoral politics through the Democratic Party.  Rejecting gradualism, Austin employed a confrontational style as he fought for equality for all and the wholesale destruction of segregation.

In 1933, in the midst of the Great Depression, Austin joined with local black attorneys Conrad Pearson and Cecil McCoy, in backing the first legal challenge to segregated higher education in the South.  Although a state court ruled against Thomas Hocutt’s attempt to enroll in the pharmacy school at the University of North Carolina in Chapel Hill, this seminal case signaled the opening salvo in the battle against segregated public education.  It led to the landmark U.S. Supreme Court case, Brown v. Board of Education (1954), which outlawed racial segregation in public schools.

Austin was also a leader in the movement for voting rights and political power for blacks in North Carolina.  In 1934, Austin and movie theater owner Frederick Watkins were elected justices of the peace in Durham.  The Pittsburgh Courier proclaimed, “For the first time in the history of the South, two colored men were elected to office on the Democratic ticket.”

In 1935, Austin joined with other leading black citizens to form the Durham Committee on Negro Affairs (DCNA), to register black voters, increase black political influence, and challenge racial inequities in education, employment, and access to public facilities.  Despite obstacles to black voting like the literacy test and racist white registrars, Austin helped register thousands of African Americans, which gave blacks a voice in politics in Durham and throughout the state.

During World War II, Austin publicized racial discrimination against African American soldiers, workers, students, and teachers, and advocated protest and litigation, spurring a growing militant movement.  Perhaps the most brutal case of racial oppression in Durham during the war was when a white bus driver shot and killed black soldier Booker T. Spicely in 1944, after Spicely initially refused to sit in the segregated black section of the bus.  After an all-white jury pronounced the bus driver not guilty, Austin used the black community’s outrage to revitalize the local branch of the NAACP.

After the war, Austin’s activism helped to undermine segregation and white supremacy.  In November 1947, he arranged an integrated football game in Durham between a white team from Philadelphia and a black team from Washington, DC.  Several newspapers reported that it was the first interracial football game in the South. In 1953, he handled public relations for Rencher N. Harris’s successful campaign to become the first black member of the Durham City Council.

During the 1950s and 1960s, Austin joined with a new generation of activists in the modern civil rights movement.  He continued to support litigation and political action, but also advocated civil disobedience.  Austin lived to see the destruction of de jure segregation.  Nonetheless, there was still work to do.  In 1971, the year of his death, the resolute editor was still speaking out for equity in education, when he challenged the practice whereby majority-white school boards replaced black principals with white principals as public schools integrated.

For more on Louis Austin, make sure to stop by the Regulator Bookshop on Thursday April 26th at 7:00PM to hear Dr. Gershenhorn read from his new book Louis Austin and the Carolina Times: A Life in the Long Black Freedom Struggle.