Baseball in Japan during the 1918 Spanish Flu Epidemic 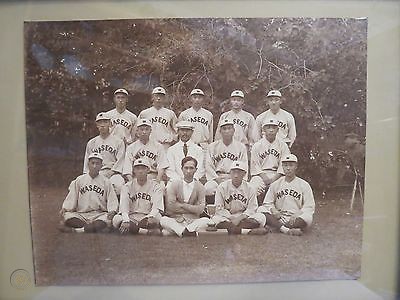 Missing baseball season? We thought we’d share this piece by Adam Berenbak, which connects us to what we’re experiencing today. Mr. Berenbak is the architect behind the exhibit Durham and the Rise of the Baseball Card, a 2016 MoDH-Durham Bulls collaboration which examined Durham’s important role in the launching the baseball card collecting phenomenon. This article originally appeared on Official MLB Historian John Thorn’s blog Our Game.

Major League Baseball has delayed the opening of the 2020 season due to the Covid-19 Pandemic, baseball’s first interruption since the 1994 strike, so has the Nippon Professional Baseball league, delaying its season for the first time since the 2011 Great East Japan Earthquake. Below is a look at baseball in Japan over 100 years ago, during another deadly virus outbreak.

Most of the popular baseball institutions in Japan, including the NPB and other professional leagues, the Big Six University Tournament, and the Spring and Summer High School Tournaments (known as Koshien) were not fully established until the middle part of the 1920s and 1930s. However, prior to that, amateur, high school and university teams had been organized and playing for decades, in exhibition games as well as tournaments, all over Japan. With World War I underway and the beginnings of the Spanish Flu epidemic dawning in 1918, baseball was a thriving presence in the country,

The first two decades of the 20th Century saw a regular international exchange of competition.[*] Tours of the US and Japan by amateur, semipro and collegiate teams began with Waseda University’s tour of the west coast of the US in the spring of 1905, right in the middle of the Russo-Japanese war.

Given the current crisis and suspension of sports globally, it is interesting to note one such tour that took place during another international crisis, the 1918 Flu Pandemic — specifically, during what is known as the second outbreak of influenza in Japan, in the autumn months of 1918. The first outbreak had begun in April, and the second in August. By September there were hundreds of thousands of cases across the country. However, the baseball schedule continued, including the collegiate game between Waseda and Keio, just as it had in the US throughout the outbreak and the war (though somewhat truncated). 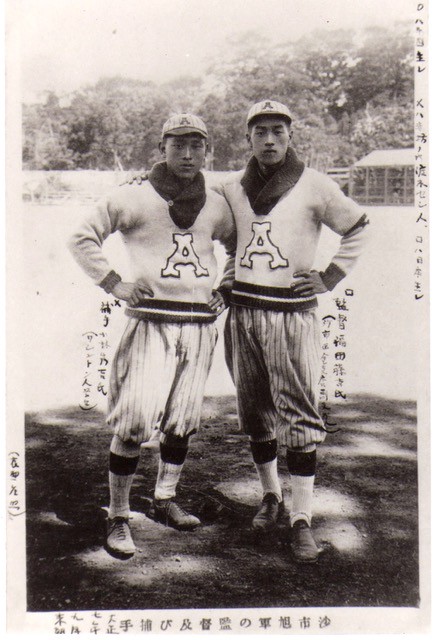 Postcard sent home by Frank Fukuda during the 1918 tour. From Through a Diamond, by Kerry Yo Nakagawa; photo courtesy of the Author

The second wave of the influenza pandemic was just emerging in the US in September 1918, aided by the massive movement of troops in the final months of the World War when the Seattle Asahi, an Issei baseball team (first generation, or Japanese-American immigrants) managed by Frank Fukuda, set out for a 25-game tour of Japan. More than just a baseball club, the Asahi was a social organization aimed at fostering societal growth. As Samuel Regalado writes:

“The Asahi club,’ Ryoichi Shibazaki points out, ‘was not a baseball team in the strict sense. It was an organization consisting of Japanese students and the main purpose was to produce the future leaders of Japanese society in Seattle through various activities like baseball.” The clubs also served as an important bridge between the first and second generation. 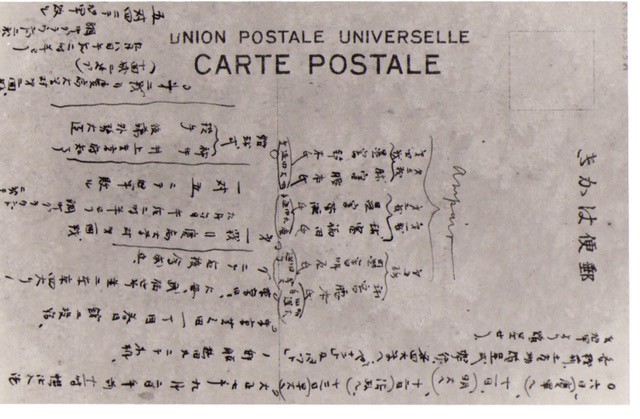 Verso of Frank Fukuda postcard. From Through a Diamond, by Kerry Yo Nakagawa; photo courtesy of the Author

Arriving in early September aboard the Atsuta Maru for what would be their second tour of Japan (the first had been four years prior), the Asahi faced Keio in a contest played on September 6, 1918. Playing against the Keio, as well as the Waseda and Meiji University nines, the Asahi came away with a 16–9 record for the tour. Along the way, the Americans participated in many of the tourist activities well known to visitors of Japan, including touring shrines such as the Itsukstina Shinto shrine, riding in jinrickshaws, viewing Mt. Fuji from the Gotenba train station, and visiting Buddhist temples. The team also went by the newspaper offices of the Mainichi Shinbun and spent some time at a Red Cross station most likely set up in response to the pandemic.

In a form of baseball diplomacy, the Asahi traveled to Japan to play competitively in 1914, 1918, and 1921, enriching the baseball lives of those Japanese American players as well as those of the collegiate Japanese ballplayers. The tours also expanded ties to their homeland while expressing appreciation for their adopted home.

The success of clubs such as the Asahi not only enriched the developing Japanese-American culture in Seattle but further advanced the deep bonds in the community. They demonstrated the power of baseball as a way to fight prejudice and combat racist ideologies aimed at stigmatizing immigrants and their families. This was no better demonstrated than during World War II when thousands of Japanese Americans were relocated to internment camps in the Western US and formed baseball teams — in part, as Kerry Yo Nakagawa says, because “during this incarceration baseball represented salvation and hope for thousands who needed a positive reminder of home life as it used to be and might be again.”

Frank Fukuda continued to participate as a player, manager, and activist for Issei baseball in the Seattle area. Baseball continued to grow in Japan through the worst of the pandemic, which tragically took the lives of nearly a quarter of a million Japanese citizens, as well as the great earthquake of 1923, and the subsequent war fronts of the 1930s and 1940s, to remain a dominant force in Japanese culture.

[*] Documented in books such as Rob Fitts’ Issei Baseball, Samuel Regalado’s Nikkei Baseball, Kazuo Sawama & Bill Staples Gentle Black Giants, Kerry Yo Nakagawa’s Through a Diamond, Ralph Pearce’s From Asahi to Zebras, Sayuri Guthrie-Shimizu’s Transpacific Field of Dreams, as well as many others.

Adam Berenbak is a collector, a baseball nut, and an archivist for the National Archives in Washington, DC. He attended grad school in Durham at NCCU. When he’s not on the phone with the Museum of Durham History, he might be appearing on 60 Minutes, or working with Congress to find stuff. It’s all a part of the job.