Tell Us Who We Left Out: Jeanne Hopkins Lucas

As part of programming for Durham 150, MoDH reflects on the contributions of a diverse group of 150 individuals, living and deceased, throughout Durham’s rich history. With a photo and caption for every individual, the exhibit 150 Faces of Durham features a selection of familiar and lesser known faces from Bull City’s past and present. Visitors are encouraged to “tell us who we left out” from this list by leaving a post-it note on our board. The Museum’s volunteers have begun researching these names and we will share their stories here on our blog. Be sure to stop by and check out 150 Faces of Durham before it closes September 1st. 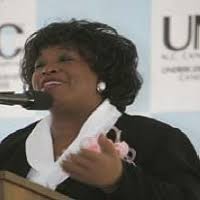 The first African American woman elected to the North Carolina State Senate, Jeanne Lucas was born and raised in Durham, where she graduated from Hillside High School and earned both her Bachelors and Masters degrees at North Carolina Central University. A longtime teacher at Hillside, she served as President of the North Carolina Association of Classroom Teachers, then in various administrative positions for Durham Public Schools. She was appointed to complete an unexpired term in the state’s 20th Senatorial District, and was subsequently re-elected six times. Along with chairing numerous committees, Senator Lucas rose to become part of the Senate leadership as Majority Whip.