On Friday, May 6th, the NC Central Graduation Ceremony awarded some very important people with some very important degrees. NCCU honored the Royal Ice Cream Seven with degrees for Doctors in Humane Letters. Mary Clyburn Hooks and Virginia Williams were honored at the ceremony in-person, and the honorary doctorates were presented posthumously to the Reverend Douglas Moore, Claude Glenn, Melvin Willis, Vivian Jones, and Jesse Gray. Dr. Doris Hughes-Moore accepted the award on behalf of her late husband, Rev. Douglas Moore, and Ms. Tammie W. Harris accepted the award on behalf of her late father, Melvin Willis. More information on the honorarium and the graduation ceremony can be read about here. Since an original sign from the now-demolished Royal Ice Cream building, the Museum and its supporters are overwhelmed with joy for this momentous occasion. 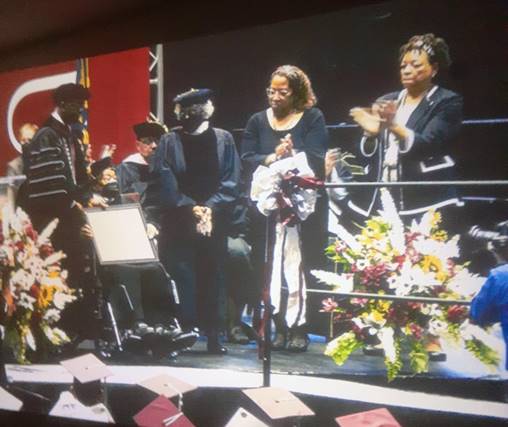 A sign salvaged from the now-demolished Royal Ice Cream building, currently on display at the Museum of Durham History

In June of 1957, a young minister, Douglas Moore, and six companions demonstrated a sit-in at the Royal Ice Cream Shop, a white-owned business in Durham’s predominantly black community. While initially receiving little attention, their actions led to the organization of other civil rights protests, including the 1960 Woolworth Counter sit-in in Greensboro, NC. The late Reverend Douglas Moore, a graduate from North Carolina College (now NCCU), was accompanied by Mary Clyburn Hooks, Virginia Williams, the late Claude Glenn, the late Melvin Willis, the late Vivian Jones, and the late Jesse Gray. The Museum is honored and humbled to have the opportunity to share their story. Below is a recording of the commencement; the honorary degrees are presented at the 1:29:20 mark.