Bennett Place: A Moment That Placed Durham at the Crossroads of History 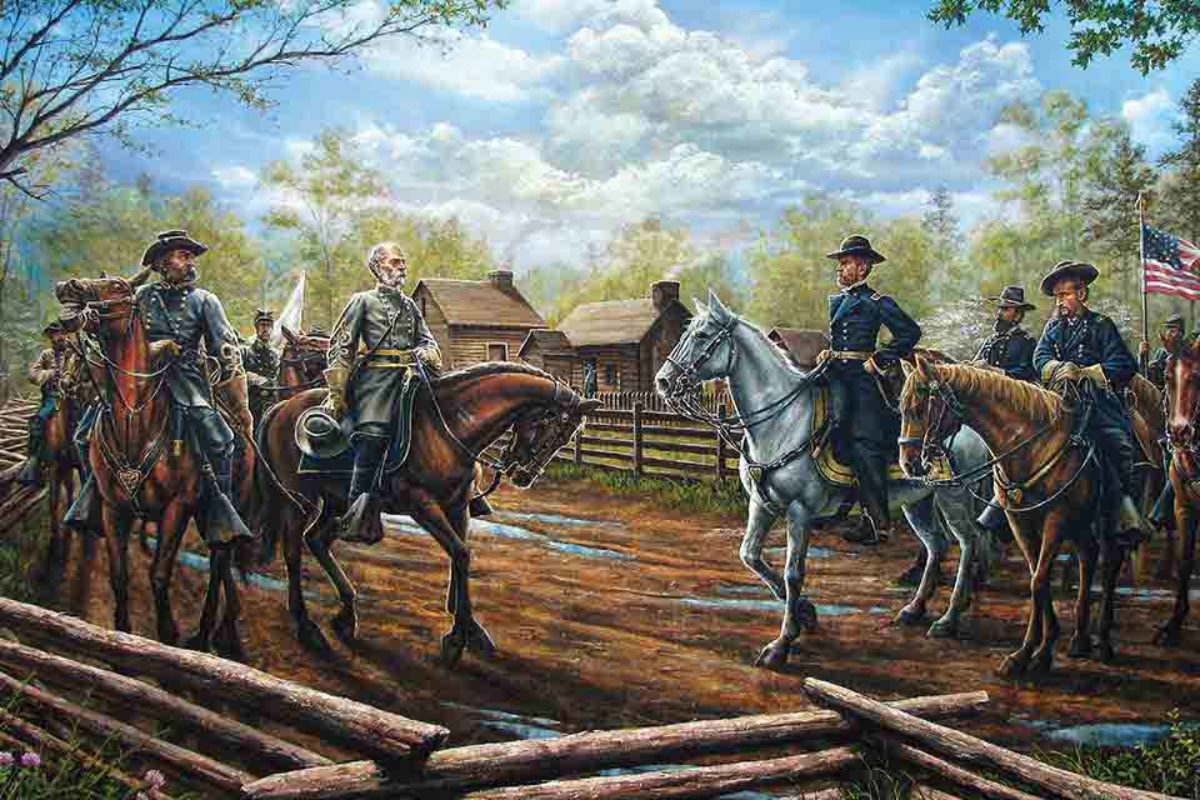 This blog was written by MoDH intern, Nils Skudra.

When popular audiences think about the American Civil War, they commonly associate Appomattox Court House with the end of the conflict since it witnessed the surrender of Robert E. Lee and his Army of Northern Virginia. Lee and his army had become the symbolic embodiment of the Confederate cause, and consequently their surrender to overall Union commander Ulysses S. Grant sent a powerful message to white Southerners that the war was truly lost. In addition, Grant’s generous terms set the tone for Abraham Lincoln’s vision of reunification and reconciliation. Appomattox has thus become forever etched in American memory and myth as the climactic moment of the Civil War, followed by Lincoln’s tragic assassination which shattered prospects for a benevolent peace, and this iconic scene has been portrayed in numerous books and films. However, the powerful mythology of Appomattox obscures the significance of a less well-known but nonetheless pivotal moment which took place in the aftermath of Lee’s surrender and had a more far-reaching practical impact: The surrender at Bennett Place, near Durham Station, in which Confederate general Joseph E. Johnston and Grant’s subordinate William T. Sherman signed terms for the capitulation of approximately 90,000 Confederate troops in the Carolinas, Georgia and Florida on April 26, 1865. This surrender placed Durham at the crossroads of American history as the site of the largest surrender in the Civil War, and Bennett Place would thus become one of North Carolina’s hallowed State Historic Sites.

Sherman and Johnston’s meeting at Bennett Place must be examined through close observation of the events that took place during the prelude. In the aftermath of Lee’s surrender at Appomattox in April, Confederate president Jefferson Davis and his cabinet evacuated Danville, Virginia, which had replaced the recently fallen Richmond as capital of the Confederacy, and traveled to Greensboro, North Carolina, where Davis met with his senior commanders, Johnston and P.G.T. Beauregard, to discuss plans for continued resistance. Although he was devastated by the news of Appomattox, Davis nonetheless retained an intransigent determination to fight on, hoping that he could rally Confederate forces still in the field for a decisive victory. However, Johnston and Beauregard both emphatically maintained that further resistance would be futile and urged Davis to seek terms for surrender. Although he was strongly opposed to the prospect of capitulation, Davis reluctantly agreed to an armistice, authorizing Johnston to meet with Sherman to discuss terms for peace.

Johnston and Sherman had fought each other in Georgia and the Carolinas over the past year, most recently at Bentonville, North Carolina in March, where the Confederate Army of Tennessee made its final offensive of the war. Over the course of his campaign, Sherman had cut a swath of destruction across Georgia and South Carolina, hoping to cripple the Southern people’s will to fight, both materially and psychologically. In North Carolina, however, he showed more restraint due to his belief that the state had a strong Unionist presence, and he hoped to bring hostilities to an end in accordance with Lincoln’s belief in a peace without recriminations. As a military commander, though, Sherman did not have the authority to conclude peace terms, and therefore during their first meeting at the Bennett farm on April 17, he came only for the purpose of discussing a military surrender, in contrast to Johnston’s instructions from Davis. The meeting was shadowed by the news of Lincoln’s assassination, which came as a shock to Johnston, and Sherman informed his army upon returning to Raleigh, having first alerted his officers whom he instructed be on the lookout for soldiers’ violent reprisals against the city, but his meeting with Johnston did not produce any concrete results.

When Sherman arrived at Bennett Place for the second time on April 18, he met with Johnston and Confederate Secretary of War John C. Breckinridge to discuss terms for a general peace. After listening to Breckinridge’s proposed peace terms, Sherman wrote his own draft of a peace agreement, which proved to be highly generous and lenient. Under Sherman’s terms, Confederate troops would take an oath of allegiance to the United States, after which they would be allowed to return home with their arms and then deposit them in state arsenals; Southern state governments would remain in place; and Southern citizens’ rights of property would be respected (except for slavery, which all three men agreed was dead). Sherman believed that these terms were in keeping with his understanding of Lincoln’s vision of a compassionate peace, in which the former Confederates would be welcomed back as citizens of the United States instead of being treated as a conquered people. However, Sherman’s terms were met with fierce denunciation in the North, which clamored for vengeance in the wake of Lincoln’s assassination, and President Andrew Johnson rejected them as an overstep of Sherman’s authority.

Upon learning of the new administration’s rejection of the peace terms, Jefferson Davis, who had relocated to Charlotte with his cabinet, ordered Johnston to have his infantry disbanded and flee with his cavalry in order to continue the fight. However, Johnston defied his commander-in-chief and met with Sherman at Bennett Place for a third time on April 26 to sign terms of surrender. By this time, Sherman had been instructed by Grant to keep his terms strictly military, and the final terms were identical to those of the Appomattox surrender. In contrast to Appomattox, however, Johnston’s surrender encompassed all Confederate forces in the Carolinas, Georgia and Florida, totaling 89,270 men. With the implementation of the terms signed at Bennett Place, the largest surrender of the Civil War effectively brought an end to hostilities in these states.

In the aftermath of the surrender at Bennett Place, the remaining Confederate forces in the field laid down their arms in the following weeks. The last three major surrenders of the war encompassed Confederate general Richard Taylor’s Department of Alabama, Mississippi, and East Louisiana on May 4, 1865; E. Kirby Smith’s Trans-Mississippi Department on May 26, 1865; and Stand Watie’s Native American battalion at Doaksville, Oklahoma on June 23, 1865. Bennett Place thus had a far-reaching practical impact in bringing the Civil War to an end. While Appomattox was highly symbolic and psychological in signalling the beginning of the end, Bennett Place proved more decisive on a practical level since it encompassed approximately 90,000 Confederate troops who might have continued to mount significant resistance. Therefore the surrender of these troops, together with the consequent cessation of hostilities in four Southern states, effectively ended whatever prospects Jefferson Davis may have had for rallying Confederate forces to fight on.

Bennett Place is preserved today as a State Historic Site, and it hosts an annual anniversary reenactment of the surrender negotiations in April. In addition, the site is home to a variety of living history events, including Veterans Day and other events that portray life in 19th-century North Carolina. While the COVID-19 pandemic has resulted in a postponement of in-person events at Bennett Place, it is highly important that we appreciate what took place at this hallowed site, as it not only hastened the end of the Civil War on a larger numerical and geographical scale but also placed Durham at the crossroads of American history, putting it on the path toward becoming the center of the tobacco industry in the postwar period.