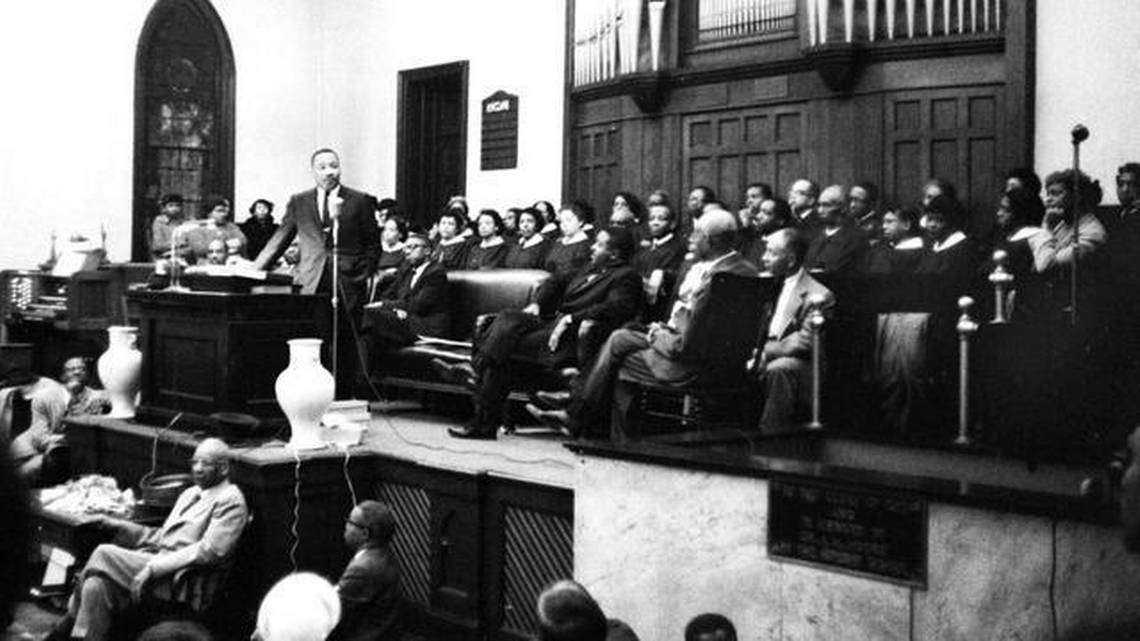 Below is the “A Creative Protest” speech delivered by the Reverend Dr. Martin Luther King, Jr. at the White Rock Baptist Church on February 16, 1960. The speech is also widely known as “Fill Up the Jails.” King gave the address during a visit to Durham in the wake of the widespread sit-in movement for integration at Woolworth Department Stores across the south.

Stop by the Museum of Durham History to learn more about King’s “A Creative Protest” and his other speeches delivered in Durham throughout the Civil Rights Era in our A Creative Protest: MLK Comes to Durham exhibit, on display from January 17- April 5, 2020.

Victor Hugo once said that there is nothing in all the world more powerful than an idea whose time has come. The dynamic idea whose time has come today is the quest for freedom and human dignity. Men are tired of being trampled over by the iron feet of oppression. They are tired of being plunged into the abyss of exploitation where they experience the bleakness of nagging despair. And so all over the world formerly oppressed people are making it palpably clear that they are determined to be free.

You students of North Carolina have captured this dynamic idea in a marvelous manner. You have taken the undying and passionate yearning for freedom and filtered it in your own soul and fashioned it into a creative protest that is destined to be one of the glowing epics of our time. For the past few days, you have moved in a uniquely, meaningful orbit imparting heat and light to distant satellites.

In this period when civil rights legislation hangs in an uncertain balance in the congress—when the recalcitrance of some public officials in the South instills us with frustration and despondency, the spectacular example of determined and dedicated young people demanding their rights gives glorious inspiration to all decent persons not only of our nation, but throughout the world. You have taken hold of the tradition of resolute non-violent resistance and you are carrying it forward toward the end of bringing all of us closer to the day of full freedom.

In my recent travels in Africa and Asia, I was struck by the youthfulness of the leaders in the struggle for liberation and by the immensely responsible role of students. What is fresh, what is new in your fight is the fact that it was initiated, fed and sustained by students. What is new is that American students have come of age. You now take your honored places in the world-wide struggle for freedom.

This creative protest against segregated eating facilities again highlights the fact that segregation is the Negro’s burden and America’s shame.

You have given an additional death blow to the once prevalent idea that the Negro prefers segregation. You have also made it clear that we will not be satisfied with token integration, for token integration is nothing but a new form of discrimination covered up with certain niceties of complexity. Separate facilities, whether in eating places or public schools, are inherently unequal. The underlying philosophies of segregation are diametrically opposed to democracy and Christianity, and all the dialectics of all the logicians of the world cannot make them lie down together.

I’m convinced more white people must join the movement against segregation in this country. The tensions in race relations in the United States today are not tensions between white and black people; they are tensions between justice and injustice, between light and darkness. If there is a victory, it will not be for just seventeen million Negroes; it will be a victory for justice, democracy and freedom. The festering sore of segregation debilitates the white man as well as the Negro. So long as America is burdened down with the ugly weight of segregation, she cannot expect to have the respect of the peoples of the world. Indeed the shape of the world today does not permit us the luxury of an anemic democracy. America must either achieve racial justice or face the ultimate social psychosis that can lead to domestic suicide.

May I say to you as you continue your protest, you will confront moments of difficulty. But let us realize that no great and lasting gain comes in history without suffering and sacrifice. I have prayed much over our Southern situation, and I have come to the conclusion that we are in for a season of suffering. Now I pray that, recognizing the necessity of suffering, the Negro will make of it a virtue. To suffer in a righteous cause is to grow to our humanity’s full stature. If only to save ourselves from bitterness, we need the vision to see the ordeals of this generation as an opportunity to transfigure ourselves and American society. Let us not fear going to jail. If the officials threaten to arrest us for standing up for our rights, we must answer by saying that we are willing and prepared to fill up the jails of the South. Maybe it will take this willingness to stay in jail to arouse the dozing conscience of our nation.

May I also urge you to continue the struggle on the highest level of dignity. You have rightly chosen to follow the path of non-violence. As we protest, our ultimate aim is not to defeat or humiliate the white man but to win his friendship and understanding. We have a moral obligation to remind him that segregation is wrong. Let us protest with the ultimate aim of being reconciled with our white brothers. As we sit down quietly to request a cup of coffee, let us not forget to drink from that invisible cup of love, which can change a segregationist into an integrationist. Let us keep our eyes on the end we seek, but let us never forget the significance of proper means. There is a success of history and a success of eternity. Right methods to achieve a right objective is itself a coming together of history and eternity, and where one uses right methods there is, even if obscured in history, a spiritual victory. Let us avoid not only external physical violence but also internal violence of the spirit. We can build an empire depending on Love. In that way, we may be able to not only teach ourselves something, but we may be able also to teach others something. The choice is no longer between violence and non-violence; it is between violence and non-existence. All the darkness in the world cannot obscure the light of a single candle.

And so I would urge you to continue your just struggle until the people with whom you trade will respect your person as much as they respect your dollar. May I assure you that you have the full weight of the Southern Christian Leadership Conference behind you in your struggle. At a certain point in every struggle of great importance, a moment of doubt or hesitation develops. Some voices declare, “Let us stop here, we have gone far enough.” We confronted this crisis in Montgomery—we had these doubts. Despite the debates, the confusion and the uncertainty we carried on. If there is one lesson experience taught us which I would hope to leave with you, it is that when you have found by the help of God a correct course, a morally sound objective, you do not equivocate, you do not retreat & dash; you struggle to win a victory.

Let nobody stop you; you are doing something that will ultimately save the soul of America. If you continue to struggle, there will be a new day in America.

We’re not rabble rousers; we’re not dangerous agitators, nor do we seek political dominance. Black supremacy is as bad as white supremacy. But freedom is necessary for one’s selfhood, for one’s intrinsic worth. Let us say to the white people, we’re not going to take bombs into your communities. We will not do anything to destroy you physically. We will not turn to some foreign ideology. Communism has never invaded our ranks. We’ve been loyal to America. Now we want to be free.

And remember that both history and destiny are on your side. All the stars in their course are supporting you. Go out with the attitude that God is with us and we have cosmic companionship. And one day, historians of this era might be able to say, there lived a great people, a black people who injected new meaning into civilization.